According to CoinMarketCap, there are nearly 20,000 cryptocurrencies, and they diverge quite significantly in terms of underlying blockchains and technology. Layer 1 blockchains are full cryptocurrency platforms or networks by themselves, while Layer 2 blockchains, which are often referred to as side-chains, are an extension of their Layer 1 parent chains with the purpose of introducing additional benefits.

Layer 1 is often described as the base layer of a protocol whereas layer 2 is often a 3rd party solution meant to specialize or abstract portions of base layer functionality while adding functionality or features. Those additional features can vary, but can include one or more of the following: 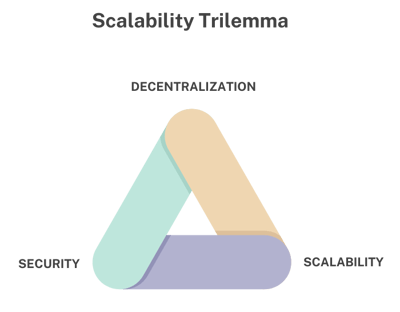 One of the more technical reasons for implementing Layer 2s on top of Layer 1s, which we won't dive into detail here is the Scalability Trilemma, which is basically you can have two of three things, but forgo the third item to do so. As a blockchain developer, which do you choose?

Coins typically have their own native blockchain solution, while tokens are assets that can run on top of an existing blockchain. A good example of native coins include Bitcoin (BTC), Ethereum (ETH) or Solana (SOL).

With the introduction of Ethereum, and its innovative smart contract capabilities, it became possible to create non-native cryptocurrencies that effectively used the template of ethereum. Specifically, Ethereum introduced the ERC token definition, which allowed other developers to fairly easily launch their own cryptocurrency without building all of the underlying Layer 1 technologies that would normally be required. These ERC tokens ride on top of the Ethereum blockchain, making use of all ETH’s benefits, while providing additional and unique benefits or features.

Newer blockchains such as Solana (SOL) with its SPL tokens, are also introducing this concept in order to drive innovation and network growth factors on its platform.

Cryptocurrencies, and their underlying blockchains, compose a fairly complex set of technologies. It’s worthwhile to have a high-level understanding...

The core activity of cryptocurrency, and their underlying blockchain technology, is the efficient processing of transactions.

While digital wallets have notionally been around for a number of years, blockchains and cryptocurrency bring wallets to a whole different level.

Get notified on new crypto insights

Be the first to know about new crypto insights so you can build or refine your knowledge of today's fast changing industry.